1. Germicidal UV Lamp The air first sweeps past the germicidal ultraviolet light after entering the air inlet. The UV light is lethal against harmful, airborne micro-organisms such as germs, viruses, bacteria and fungi (such as mycotoxins from mould).

2. Collects Particles & Pollutants Airborne particles and pollutants are magnetically attracted to the metal dust collection plates, like a magnet. The built in fan, along with the electronic breeze, draw pollutants through the unit and its magnetically-charged plates. Then, you simply wipe the plates clean periodically, removing them from the environment.

When the metal dust collection plates become full of particulate and residue, simply wipe them off with a damp cloth. Then, dry the plates and reinsert. It’s that easy. The amount of contamination collected by the rag will give you and idea of how much airborne pollution is being removed. You Can Really See the Difference!

3. Circulates Negative Ions Negative ions are accelerated in large numbers throughout the room, removing airborne particles and pollutants from the air. 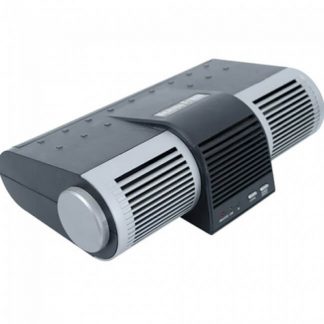